The “Imagine 2030” Workshops and Consultation Tool

The adoption of the allencompassing Agenda 2030 with its 17 goals and 169 targets by 193 United Nations Member States, including Bosnia and Herzegovina, was a landmark commitment, but one without a ‘user manual’ or ‘blueprint’ instruction as to how to initiate meaningful dialogue and the engagement of multiple stakeholders. This allows for creativity and innovation across these countries and throughout the United Nations system, including Bosnia and Herzegovina. Starting from a very low knowledge base and level of awareness concerning the MDGs and only limited post2015 discourse within the country, the United Nations in Bosnia and Herzegovina recognized that innovative business is required in order to get Agenda 2030 and the SDGs into the focus of policymakers, CSOs, the private sector and citizens at large. How to communicate and how to engage stakeholders meaningfully in such a complex agenda was a key question that led to the conclusion that thinking outside of the box and doing something different and authentic and something truly engaging is the only way forward. Bringing the voices of citizens into official debates on Agenda 2030 and the SDGs was the central aim of the initiative.

Most of 2016 was spent conceptualizing, designing and initiating an ‘Imagine2030’ advocacy and engagement initiative. This was done using innovative workshops and online engagement and competitions with the support of the United Nations in Bosnia and Herzegovina. The initiative began in October 2016 and the tools and approaches that were developed are used continually to engage stakeholders in SDGs, with particular focus on youth and local communities.

To date, workshops and presentations across the country have reached over 3,000 people directly, including representatives from institutions from all levels of government, CSOs, the academia, the private sector and citizens in general. 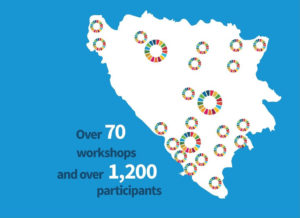 Central to effective advocacy for and engagement workshops on the SDGs was the use of the innovative SDG Consultation Tool. The SDG Consultation Tool instigates awareness, dialogue and teamwork problem solving centered on burning issues in society in Bosnia and Herzegovina. The tool is also a qualitative data gathering method that explores the positive and negative associations of citizens with both the past and present, their vision of the future, the way they see the future in terms of what values, actions and structures need to be in place and what threats and/or opportunities need to be addressed across the SDGs/targets. The ultimate aim of the tool is to identify solutions/ideas on how to address or accelerate achievement of the SDGs/targets within the local context. The tool also enables participants to priorities targets for each of the SDGs.

The voices of citizens gathered through the SDG Consultation tool were analyzed and presented during the two-day multi-stakeholder consultations on the SDGs that took place in May 2018 and formed the key input for the creation of Vision 2030 and the SDG Framework document in Bosnia and Herzegovina.

Seen from the analysis of the collected voices of citizens it is evident that there is a clear correlation between the SDGs and burning societal priorities. They eloquently and clearly define the needs, problems and solutions and demonstrate that citizens want an opportunity to co-create the future and want to take an active role in ensuring the required changes. In light of this, the ‘Imagine2030’ initiative continued to engage and shifted emphasis from the initial advocacy and awareness to instigating ownership, accountability and action with the aim of empowering citizens and communities to hold their governments accountable and to generate citizen calls for action.